These voyeurs pics are astonishing!
Somewhere in Gothic Europe, Baron Frankenstein (Joseph Cotten) and his assistant Dr. Marshall (Paul Muller) are taking receipt of a freshly dug up human corpse from the local graverobber Lynch (Herbert Fux) – the Baron then requests that Lynch obtain him a fresh human corpse – dead no more than 6 hours. The next morning, the Baron’s daughter Tania (Rosalba Neri) arrives home after completing her University course in medicine, and she is eager to join in her father’s work, but he is unwilling to let her. Eventually the Baron and Dr. Marshall complete their work and sucessfully re-animate their self-constructed man, but with the brain of a criminal in his head, he turns on, and kills the Baron before escaping the castle. Trying to save her father’s name, and stop the creature’s rampage of death across the countryside, Tania insists on continuing the experimentation to design a second creature who will be able to fight the first…

Inspired by the Universal horror films, looking like the Hammer films, and containing a fair dose of European style blood and nudity, Lady Frankenstein works surprisingly well. Taking only a very loose inspiration from Mary Shelley, the script is a simple gothic horror story, with a hint of romance. Generally well written, with enough characterisation to make it interesting, the film builds up to a good climax. The American cut of the film (reviewed here) was substanually altered, and is missing about 15 minutes of plot, hence there are some random jumps in the storylines that don’t seem to make much sense, certainly the viewer should not expect any clever twists or moral messages. Relatively slow paced the story is interspersed with random sequences of the creature attacking villagers, obviously used to notch up the death and gore count.

Director Mel Welles does a decent job here with some relatively plain direction that lets the story tell itself. More impressive are the gothic sets for Frankenstein’s castle with look very nice, with a rather understated lab more akin to the Hammer films than the massive, elaborate get-ups that the Universal Frankenstein’s were able to use. An all star euro-cult cast is present including Jess Franco’s favourite Paul Muller giving a very good performance as Dr. Marshall, the always attractive Rosalba Neri as the Lady and character actor Herbert Fux in top sleazy form as the graverobber. American actor Joseph Cotten, as Frankenstein himself, seems to be slumming it here compared to his better known Hollywood roles, but still manages to give a good performance. 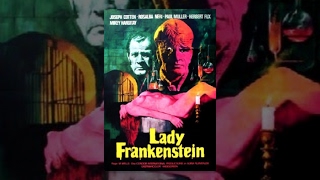